This exhibition and accompanying symposium brings together two unlikely companions: the rhinoceros and the city of Venice. It seeks to highlight and interrogate the consequences of luxury consumption on an endangered beast and an endangered city.

Perhaps surprisingly, this ancient mammal and this shimmering city have a curiously entwined history and current predicament. The rhinoceros is represented in one of Venice’s most ancient mosaics, and an eighteenth-century touring rhinoceros called Clara is famously depicted by Pietro Longhi, one of the city’s great artists. The rhinoceros is the oldest living mammal on earth, and Venice was the longest-lived republic.  A world without rhinos and a world without Venice is unimaginable. And yet both Venice and the Rhinoceros have become victims of their desirability and objectification as luxury objects – both consumed without discrimination by an ever-expanding consumer class. The horn of the rhino, made of intrinsically worthless keratin, has become one of the world’s most costly luxury objects; an unlikely symbol of status and prestige in a primarily Asian market. Every eight hours a rhinoceros is killed to satisfy demand. A weighty beast which has roamed the earth for 50 million years, now faces the very real danger of extinction. The city of Venice is now overwhelmed each year by a mass tourist market of 30 million people. Every day an average of 60,000 tourists descend on a city with a population of only 54,000. The effects on the delicately balanced eco systems of the lagoon, and of the city are palpable and have reached a critical level.

In November 2018, an international collaboration of artists, conservationists, poets, writers, and historians, will explore the paradoxical magnificence and fragility of both Venice and of the Rhinoceros. In a combined symposium and exhibition, they will reveal the surprisingly recent and artificial construction of rhino horn as a unique object of desire, and the confection of legends and pseudo-historical rituals that accompany the trend for its consumption by business leaders at the highest level. And they will unravel the complex threads involved in the mass tourism market of Venice with its destructive consequences on one of the world’s most beautiful of cities.

Inspiration for the event comes from the artistic oeuvres of Venetian artist Gigi Bon and her Studio d’Arte Mirabilia who has long seen a connection between the rhino and Venice, and of Taiwanese artist Shih Li-Jen and his King Kong Rhino exhibition (featured in both the Venice Art Biennale 2017 and the current Venice Architectural Biennale 2017). Both Bon and Li-Jen are joined by the English-born Australian conservationist Lynn Johnson and her ‘demand-reduction’ campaigns in Vietnam and elsewhere. Johnson is the founder of ‘Nature Needs More’. The exhibition and symposium are tied together thematically by the work of Melbourne historian Catherine Kovesi on the longue durée of Luxury and the effects of uncoupling consumption from ethical constraints.

Exhibition : "41X" of Feleksan Onar
from 9 to 16h of September 2018 at the magazzino gallery of the palazzo (874 dorsoduro 30123 Venice )
Visiting hours : 11 am to 6 pm
Inauguration event : 13 September 2018
Glass Conference : "Murano -Istanbul:a glass making journey" from 3 to 6 pm (simultaneous translation in English and Italian), please see the content in attachment.
Opening Cocktail and visit of the exhibition 6 pm to 9 pm at Palazzo Polignac courtyard 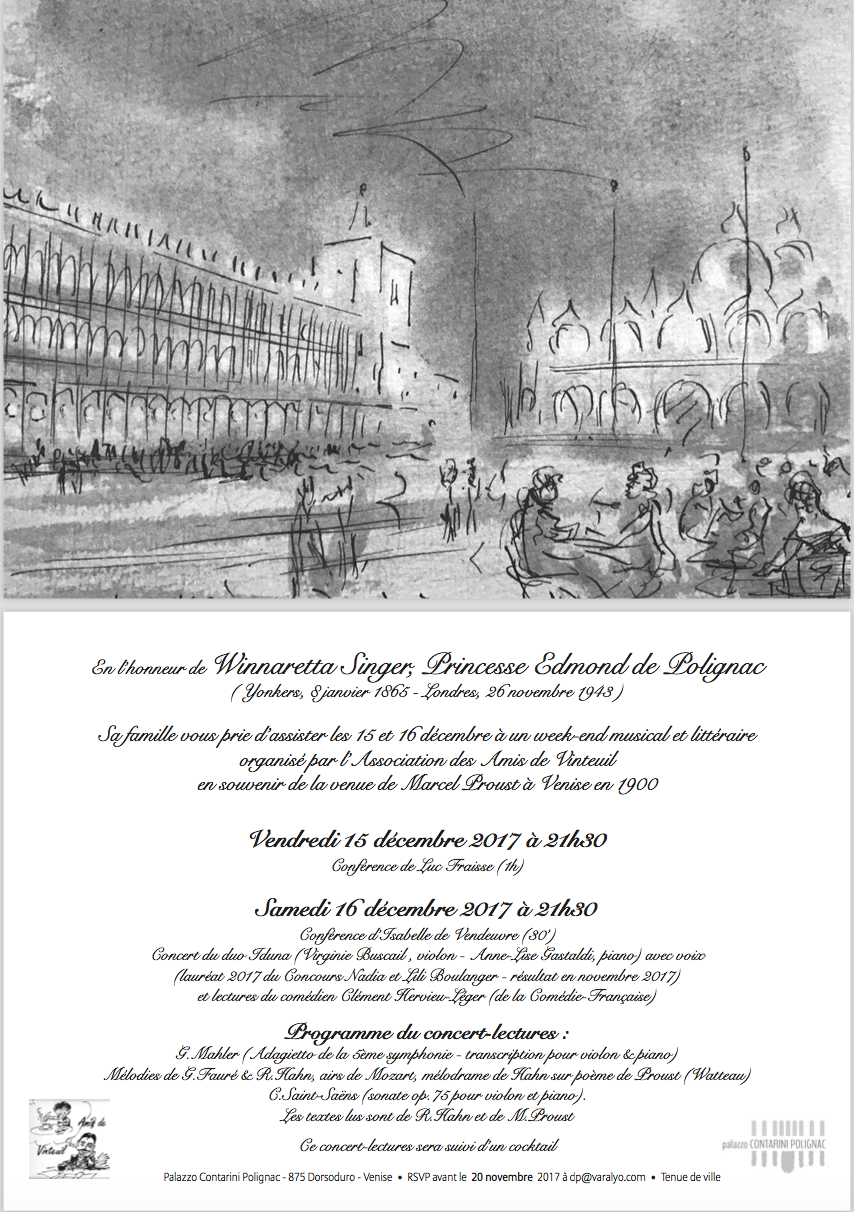 A Life in Music

The magnificent room in which we find ourselves, here in the Palazzo Polignac, has a hallowed past, one that echoes through the history of twentieth-century music.  For it was here that Winnaretta Singer, Princesse de Polignac, held her summer salon, and where so many of Europe's great artists performed new works by emerging composers and where violin concertos by Vivaldi hidden for more than a century in obscure libraries were heard for the first time in the twentieth century.

Combine first and second paragraphs -- no space in between.

The owner of the palazzo, Winnaretta Singer, dedicated her life to perpetuation of music.  For her it was a psychological necessity.  Equally imperative was annual refuge from the hustle and bustle of Paris life, and she found it here, in the magnificent edifice, where the effervescent sounds of Bach and Stravinsky were accompanied by the gentle movement of the Canale Grande.

Much of Winnaretta Singer-Polignac's musical activity was generated with the intent of honoring the memory of her beloved husband, Prince Edmond de Polignac (1834-1901), himself a composer, for whom the palazzo was purchased as a birthday present in 1900.  The couple had [remove alas,] little opportunity to enjoy their Venice life together before illness brought the prince's life to an end in August 1901.  Prince Edmond had been a creator of daring works using alternative scales, and it was his innovative and forward-thinking approach to composition that inspired Winnaretta to perpetuate new music for the rest of her life.  Newness, in general, was one of the things that Winnaretta valued most.  In 1904, she renovated her Paris mansion, creating a music room large enough to comfortably accommodate a chamber orchestra and 200 guests. The large living room of 43 Avenue Henri Martin was reserved for major orchestras and renowned artists, while the atelier of the rue Cortambert offered street concerts with organ accompaniment and more intimate musical evenings. Meanwhile, the salon of the Princess de Polignac reflected the thriving artistic activity of his time. A dozen times a year, artists and aristocrats would gather for a sumptuous dinner and then they went into the music room to enjoy a wonderful musical event. The princess became "Tante Winnie" and it was an honor to maintain a level of excellence that her friends were invited to share, not for their social status or wealth, but for their talents or, more importantly, their love for music.
During World War I, Winnaretta began a project of commissioning works by young composers, such as Stravinsky, Poulenc, Satie, Falla, Milhaud, and Weill, among others. [removetravinsky: Renard dir. Pierre Boulez (part I).] She used the Singer Sewing Machine fortune to promote modern French music, building up a repertoire of nearly twenty commissioned works, most of which had their first performances in her salons, and which are still in the active repertoire today. Winnaretta spent a part of every year in Venice, where she welcomed musicians from every corner of Europe. During her [removelong] stays during the summer and autumn months, she hosted musical gatherings that became as renowned as those held in her Paris salons. Pianists Clara Haskil and Renata Borgatti and violinist Olga Rudge (Ezra Pound's lover) performed there so frequently that they were practically "house musicians." Diaghilev and Cole Porter were regulars, as were members of Les Six. Arthur Rubinstein spent his honeymoon at the Palazzo Polignac. Toscanini was often in attendance at the musical gatherings; after the concerts, he would go to the kitchen to help prepare the spaghetti. Vladimir Horowitz lived there for a number of years, and he and Winnaretta became close friends.

Winnaretta was also influential in making sure that the works of French composers whom she patronized were given places in the summer festivals. Combine this sentence with the next paragraph: She was the honorary president of the International Festival of Music of the 1932 Venice Biennale, and it was thus that Poulenc's Two-Piano Concerto and Falla's El Retablo de Maese Pedro were featured at the Festival. Stravinsky wrote Winnaretta a Piano Sonata as a "thank you" for her support, and that work, too, was premiered in Venice, in 1925.

Winnaretta's annual visits to the palazzo were cut short by the advent of World War II.  She died in London during the Blitz, in November 1943.  But her memory lives on in the palazzo's halls.  Today, her family honors her by filling those halls, once again, with beautiful music.

A three-day creative gathering with participants drawn from across the world, exploring food and Venetian culture through photography, writing and hands-on experience in the kitchen making, amongst other dishes, traditional Venetian pasta (bigoli) and sweets ('dolci’).

Save Venice, Board Member's Cocktail
25 august 2013